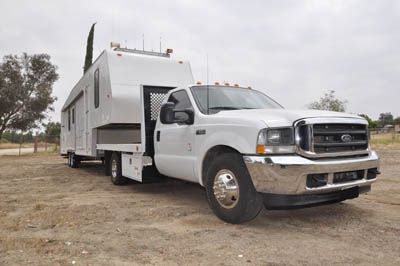 This Mobile Command Post provides both Operations and Communications.
It is divided into three sections:
Section I
In the front section are 2 Dispatcher positions plus 3rd non-radio work station. Front rack mounted Radios include 2 Command VHF radios , 1 Government Band UHF radio , 1 Public Safety T-band radio and 1 800 Mhz radio. In addition to rack mounted radios there are several interconnected radios (see compete list following) accessible via Telex VEGA dispatch consoles. Utilizing these consoles enables you to cross-patch any and all radios, select tones, send alert and monitor multiple frequencies. A networked computer is mounted at each dispatch position. Networked computers include Kenwood and Bendix King Software.
Section II
Immediately behind dispatch is the Supervisors Office. This enclosable room contains a work area with networked computer, T-card racks, supply storage and electronics cabinet. Supervisor office and Dispatchers can be separated from Operations area.
Section III
The main work area (mid to rear) contains the Operations section. 8 prewired work stations with multiple AC outlets and data lines. To guarantee continuous emergency operations the whole unit is powered by a 12v uninterruptable (battery) power source. The spaciousness of this area is increased by a 13â?? slide out.
The units exterior is clad in a new white aluminum skin and features a 21â?? RV awning and a raised briefing platform